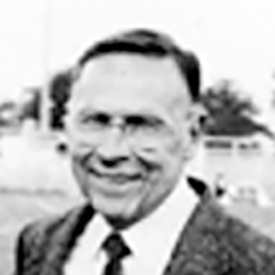 Dr. Thomas started working at the Columbus Zoo as a summer job at the age of 16. He was “at the right place, at the right time” as he helped participate in Colo’s birth, the first Gorilla born in captivity. His fame from attending this birth landed him on the television show “To Tell The Truth” and also a photo in Life magazine.

After serving in the Armed Forces in Korea, Thomas attended The Ohio State University where he was awarded a Doctorate in Veterinary Medicine in 1959. He went on to become the Director of the Oklahoma City Zoo at age 29. Following that he was named Designer, Planner, and Director of the Henry Doorly Zoo in Omaha, Nebraska and later, the Gladys Porter Zoo in Brownsville, Texas.

By 1974, Thomas was named the Director of the Los Angeles Zoo and served there for over sixteen years. He has been a consultant and advisor to zoos in the United States, Canada, Peru, and Mexico. He was also chief advisor to the Taipei Taiwan Zoo. Dr. Thomas was instrumental in establishing conservation efforts in Madagascar and Indonesia.

His efforts were far-reaching and included being named Technical Advisor for several television shows such as Peaceable Kingdom and Zoo Life. He became a spokesperson for conservation and endangered wildlife,
traveling extensively lecturing on conservation and the plight of the world’s wild life. He also collaborated on authoring a book “Dolphin Conferences and Elephant Midwives” and has also been involved in writing the Encyclopedia of Endangered Species.

Thomas served on the faculty of UCLA and was an advisor to the Guadalajara, Mexico Zoo. Many of his writings concerning Zoological matters have been published.

Update: Dr. Thomas passed away March 17, 2001 of complications following emergency surgery in Brunei. He and his wife, Marilyn, were there on a cruise. Warren and Marilyn Thomas had three children and five grandchildren, and had lived in Ashland, Oregon. Mrs. Thomas now resides in Pacific Palisades, Ca.

A December, 2006 Columbus Dispatch article on the 50th birthday of Colo, it mentioned Warren Thomas as being the one to find Colo, soon after her birth, lying on the floor of the cage, not breathing. He administered CPR to Colo bringing her back to life.