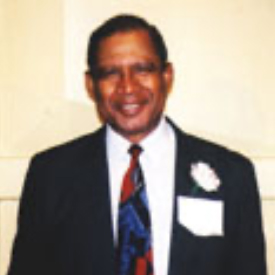 Aurealius “Reedy” Thomas was an outstanding football player at West and also played for and won many honors while at The Ohio State University.

An All-Ohio Football Player in 1952, Thomas was All Big Ten and All-American in 1957. Thomas almost didn t get to play at OSU, but legendary West coach M.E. “Mack” Pemberton intervened and personally took him to meet Coach Woody Hayes.

At the time, Thomas played both offensive and defensive tackle and weighed only 190 pounds. Coach Hayes liked his tackles to weigh about 250 pounds and be taller than Thomas. Hayes turned him down, but Thomas attended the summer football camp where he impressed the coaching staff so much with his skills and performance that Hayes changed his mind, and the rest is history!

In 1954 and 1957 OSU won National Championships with Thomas playing defensive right guard and offensive nose guard. After college, Thomas was with the Pittsburgh Steelers in 1958 and later served as an assistant football coach at OSU.

From 1959-1961 he was a teacher and assistant coach at Central High School, then from 1961-1965 head football coach and teacher at East High School. In 1964 he was named Central Ohio Football Coach of the Year.

Thomas was a self-employed insurance agent and broker in Columbus, then returned to teaching at Columbus Public Schools in 1986, teaching for six years before acquiring a job with CPS as the Coordinator of School-Business Partnership Program.

Thomas also has served the Columbus community in various organizations and groups. He was named to the National College Football Hall of Fame in 1989 and The Ohio State University Athletic Hall of Fame in 1992.