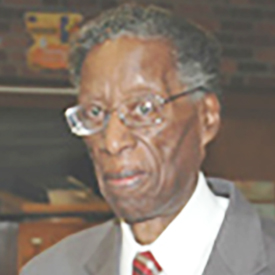 Dr. Flewellen graduated from West High School in June 1946. He participated in athletics, he was the Historical Editor for the Occident, and he was the West High representative for Columbus Schools’ ‘Profiles of Success’ program.

He married Nellie Parrent on September 5, 1953, and they have three children: Forrest LeVecque, Kevin, and Terri Enriquez. Forrest and Nellie have six grandchildren.

His peers consider him a pioneering black journalist. Forrest was a cadet principal at Central Evening High School where he also taught 12th grade English and Journalism.

He developed management philosophies, controls, and reporting systems. He wrote a feasibility study for the creation, construction, and operation of a $24,905,000 Steel Rolling Mill in Niger and a $14,000,000 Iron Foundry in Anambra State, Nigeria.

He developed a 10-year cash flow and international loan and credit agreement for a $12,000,000 Flour Mill for the Benue State government, also in Nigeria. Forrest trained farmers in Honduras to form village governments and operate a sugar mill. And he was a technical specialist in Mexico for city planning and the conversion of electrical and mechanical machinery to oil production use by PEMA, a nationalized firm.

He was editor/publisher of minority newspapers in Columbus and Cincinnati, he authored two novels, and numerous articles he wrote were published nationally.

Twice he was named the Defense Agency’s Top 10 Employee, and he was named one of the Top Ten Columbus Persons by a local newspaper. He received the Top Management Award by the Columbus Federal Executive Association.

Mayor Sensenbrenner named him as the Model Cities Interim Dispenser of Funds. He was elected to the Carter G. Woodson National Hall of Fame.

He directed the Bicentennial Freedom Train visit to Columbus and the Defense Center. He was the first Administrator for the City of Pataskala, received the Distinguished Person Award by the Hilltop Reunion Committee, and in June 2010 he was inducted into Hall of Fame at the Defense Center in Columbus.