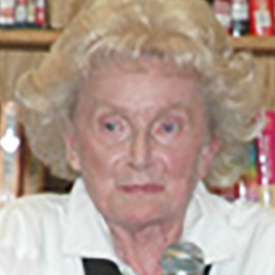 Jeanne Thompson Cummins grew up on the Hilltop, attended kindergarten and first grade at Ohio Avenue Elementary, and completed elementary school at Highland Avenue. She graduated from West High School in January 1943. She was destined for show business at an early age – “starting to sing before she could talk” and “starting to dance before she could walk” – to quote a song from the movie Mama Mia.

In 1930, when she was five years old, she performed in public for the first time on station WAIU in the Lincoln-LeVeque Tower in Columbus. She became a fixture on the radio, in amateur shows, at church socials, and at venues like the Southern Hotel’s Knickerbacher Theater.

Jeanne continued to perform throughout her years at West. One of her fondest memories was the “Red, Hot & Blue” musical which included some of the finest musicians in Columbus at the time – Ziggy Coyle trumpeter, Dr. Bob Sinclair drummer, and many others who went on to play in the big bands of the day.

While singing with the Bernie Cummins Orchestra, she traveled all over America and became the darling of the hotel music set. In the late 40s and early 50s, the Bernie Cummins Orchestra remained popular and continued to pack in the crowds. Jeanne sang with the band during the NBC Coast-to-Coast radio broadcasts from the Edgewater Beach Hotel in Chicago, Illinois. She married Walter Cummins in 1946 and began raising her family of six children.

In 1948, they left the band and moved back to Columbus. Jeanne continued to sing with the best bands in Ohio, and from 1958 to 1960 she portrayed “Susie Snowflake” on the WBNS-TV’s Santa Claus show. This led to her being hired by WLW-TV as their “gal Friday” for a succession of daytime talk show hosts and for one of central Ohio’s popular DJs of the time – Spook Beckman. She also guest starred on “Lucy’s Toyshop.”

She was a spokesperson for several local products and performed at a local appearance for ‘Lady Bird’ Johnson, and a year later performed for President-to-be Richard Nixon.

Jeanne sang at the Neil House for a month before it was torn down in the mid-70s. She continued to perform on various TV shows and radio programs and in big band concerts in the 70s, 80s, and 90s. In 2008, she headlined a reunion of the Bernie Cummins Orchestra at the Bellaire Biltmore Hotel in Clearwater, Florida.

In recognition of her contribution to music in Columbus, in 1995 she was inducted into the Columbus Senior Musicians Hall of Fame.