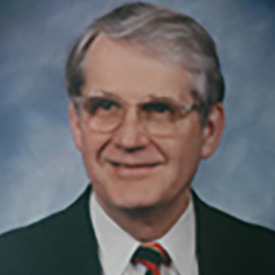 Jim graduated from West High School in January 1948 after successful school years in which he was president of his senior class, field leader and quarterback of the renowned 1947 ‘eleven’ football team, and winner of the prestigious Agonis scholar-athlete award.

His father, Foreman Slager, was a West High School mathematics teacher. His mother, Mary Slager, passed away at age 92. He married a North High School graduate, Barbara Lehman, who was a cheerleader for the Polar Bears and a 1953 OSU graduate. They have two daughters, one son, and 13 grandchildren.

After Jim was graduated from The Ohio State University in 1953, he fulfilled two years of military obligation and came out of the OSU Air Force Reserve Officers Training Corps as Second Lieutenant.

Taking his officer status to Dayton, he was assigned to Wright-Patterson Air Force Base as a research and development architect. Jim was in private business for 20 years in Dayton, co-owner of Slager & Beachler, Architects. The broad range of projects at the firm included designing buildings at military installations in five states.

Following that he was a member of the United States Department of State architectural staff for 15 years during which he and Barbara made their home at Montgomery Village, Maryland. They now reside in Pittsburgh, Pennsylvania.

Jim traveled all over the world using his considerable talents in facilities design to aid people and government entities. His responsibilities included designing, constructing, maintaining, and advising on projects such as consulates, embassies, libraries, and ambassador working residences.

Through his government representation he was a powerful force for national respect and goodwill. He made many friends and allies around the globe for both himself and his country by virtue of his shared professional skill and personal decency and integrity.

Upon his retirement in May 2000, Jim was extended grateful appreciation in Washington, D.C. when the U.S. Department of State presented him with its Franklin Award. Inscription on the award recognized him for his “architectural expertise; management ability; numerous projects successfully completed; and improvement of U.S. government real assets.” Jim’s ultimate boss during his last year with the State Department was Secretary of State Madeline Albright.

James Slager is a former member and president of the Potomac-Bethesda Rotary Club in Maryland. He held the civic club’s top office in 1998-99. He is currently a member of Pittsburgh Rotary Club.

Aside from his Rotary responsibilities and visits with family, Jim and Barbara travel, play tennis, and attend weekly Bible study classes with fellow seniors from Christ United Methodist Church near their home. And, just to avoid becoming rusty, he maintains a part-time private architectural practice.