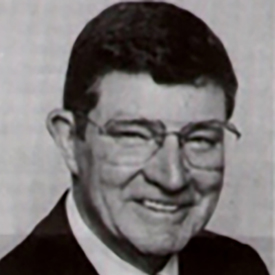 Donald Borror attended West Broad Elementary School and West Junior and Senior High Schools. Following graduation from West, he graduated from The Ohio State University School of Law and was a Captain in the U.S. Air Force. At West, Borror was President of the Class of 1947 and received both the Hauntz Award and the Agonis Award for his athletic abilities.

Don began building homes to put himself through law school. This turned into his life’s work. In the 1970s he founded Borror Corp. and started building homes on a larger scale which developed into one of the largest home building businesses in central Ohio. They changed the business name from Borror Corp. to Dominion Homes in 1997.

Formerly Chairman of the Board of Dominion Homes, Inc., Donald turned over the reins of the business to his eldest son, Doug, in 1999. Donald was chairman emeritus until he relinquished that title in late 2006. His other son, David, is executive vice president and his daughter, Donna Myers, is also involved in the business as a major shareholder. Donald continues to be responsible for long-range planning and management activities, still coming to his office daily. Dominion Homes is one of the leading land developers and builder of single-family homes and condominiums in central Ohio, surrounding communities, and since 1998 has been building in Louisville, Ky.

An Ohio real estate broker since 1958, Donald is a member of the American Society of Real Estate Counselors, as well as the Columbus, Ohio and National Boards of Realtors. He is also a member of the Finance Committee of the Catholic Diocese of Columbus and is their primary real estate consultant.

His community service includes membership on the Board of the Columbus Clippers baseball team, the Greater Columbus Area Chamber of Commerce, and COSI – the Center of Science and Industry, and is a trustee on the Capital South Community Urban Redevelopment Corp. He was instrumental in bringing the Columbus Clippers baseball team to Columbus, was involved in bringing the City Center shopping area to Columbus, and has been a supporter of the Franklinton area, where his father owned a business. Don’s wife, Joanne, is the one who tries to keep up with this busy individual.

Update: Donald Borror died December 31, 2006 at the age of 77. He is survived by his wife of 54 years, Joanne; his brother, Richard ’48; sons Douglas and David and daughter Donna Myers, and five grandchildren. In addition to his business work, Donald was also well known for his charitable work.

When the Schottenstein family signed-on as the primary benefactor of the new OSU basketball arena which resulted in having the facility named after them, good friend and business rival, Don, wanted to do something to ‘amuse.’ He contacted his alma mater and inquired about having the short ‘street’ north of the facility named Borror Rd. For a donation, they agreed. Don’s act means that all mail going to the Schottenstein Center must be addressed to Borror Rd.!