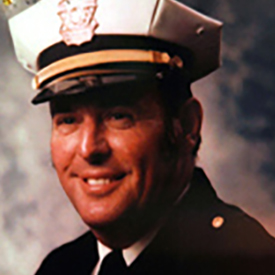 Richard (Dick) Lloyd Hoover was the son of Lloyd and Leona (Maloney) Hoover. He was born on December 11, 1925. He had two younger sisters, Joanne and Judy. He married Joan E. Beh ’45. They have one daughter, Terry.

Dick received his initial athletic training at St. Aloysius Elementary School. He started his freshman year at West Junior High in 1939. He played forward and guard on the Junior and Senior High basketball teams. He was captain of the basketball team his junior year. He was a left hand pitcher on the West Junior High baseball team that won the City Championship. He also pitched in high school, and the team won the City League Championship in 1941, 1942, and 1943.

In Dick’s senior year, he was a member of the Hi-Y Club City Council. He was also elected Vice-President of his senior class. Dick graduated from West High on June 9, 1943. On June 14, 1943 at seventeen years old, Dick and his parents signed his first contract with the National Association of Professional Baseball Leagues for Minor-Major League Teams. He was assigned to the Jersey Exhibition Company in Jersey City, New Jersey on June 18, 1943. He was assigned to the Bristol Twins in Bristol, Virginia for summer training in the Minor Leagues on August 30, 1943. In 1944 his contract was renewed for the Jersey City ball club for spring.

On June 12, 1946, Dick signed a contract with Jersey Exhibition Company and was sent to Cooperstown, New York for an Exhibition game to celebrate Baseball’s 107th Year Anniversary. The New York Giants played the Detroit Tigers. In this game, Dick relieved Hal Schumacher in the 4th inning. He struck out five men and the Giants won 9 – 5.

On September 23, 1946 Dick was assigned to New York with the Giants National Exhibition Company. On January 7, 1947 he was advised to report to Phoenix, Arizona for spring training with the Giants to begin on February 16, 1947.

In April 1947 Dick was assigned to the Minneapolis Millers team in Minnesota. In May 1947 that team played in Columbus against the Redbirds. Mayor James A. Rhodes proclaimed the day as “Dick Hoover Day”. A special tribute was held at Red Bird Stadium in his honor.

In June 1947 he was sent to Jersey City to join the Jersey Giants. From July 1947 through 1952, Dick was assigned to Minor League teams: the Nashville Vols in Tennessee, the Albany Senators in New York, the Atlanta Crackers in Georgia, and the Milwaukee Brewers in Wisconsin.

In the spring of 1952, Dick was sent to spring training with the Boston Braves in Bradenton, Florida. He was sent back to the Milwaukee Brewers for the 1952 baseball season. In the spring of 1953, Dick was assigned to the Toledo Sox in Toledo, Ohio with the American Association and continued with them from 1954 to 1955.

On August 3, 1955, Dick and Toledo Sox Manager George Selkirk had a dispute about Dick’s pitching. On August 5, 1955, Dick optioned to the Columbus Jets with General Manager Harold Cooper. On August 14, 1955, making his first home start since joining the Jets, Dick pitched the 2nd game of a double header against the Richmond Virginians in Jet Stadium. With the help of his teammates, he pitched a “No-Hitter” and the Columbus Jets won 10 – 0. Dick finished out the 1955 season and retired from professional baseball at age 29.

Dick entered the Columbus Police Academy on September 14, 1955. He graduated on December 7, 1955 from the Training for Police Recruits. For the next 25-1/2 years, Dick held various duties for police officers. Some of his assignments included: an ambulance duty, a cruiser, the traffic bureau in downtown Columbus, and a three-wheel motorcycle. He was also a sergeant in the Community Relations Bureau.

Dick was the director of the Police Athletic League. The league was designed to create an environment where police officers and young people of the community could better communicate. Through the medium of athletics, the program helped promote positive contacts between police and young people.

Dick was also in charge of the Crime Prevention Unit and participated in many crime alert seminars. Dick and three other officers in that unit founded the Columbus Clippers Crime Prevention Baseball Card Program for children.

Sergeant Hoover retired on March 28, 1981 at 55 years old. Tragically, he died in a traffic accident in Florida on April 12, 1981. Charles W. Westlake, a writer, published the Columbus Baseball History 1876-1981. He dedicated the booklet to the loyal fans of central Ohio and to the memory of Richard (Dick) Hoover.