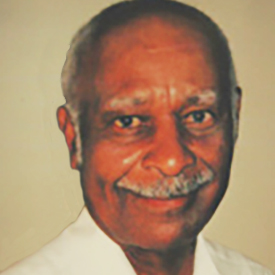 His nickname came along soon after, although many years would pass before he learned the story behind it. His father had a friend named Earl; someone his mother was not fond of. Her defensive response on behalf of her son was, “I’ll not call him Earl again.”

“Wimpy,” from the hamburger loving character of Popeye comics, became the name Mr. Potts encourages his friends and associates to use when addressing him. In 1950, he was a 125-pound safety on the football team at West and a guard on the basketball squad. His time as a basketball player was cut short, because he graduated in the January 1951 class.

Wimpy entered the Army in 1953 and served as a truck driver with a supply unit in Stuttgart, Germany. He later learned he could have received royal treatment had he told his German friends that he had been a neighbor of track legend Jesse Owens. The legendary track star is still highly regarded abroad for winning four gold medals at the 1936 Olympics in Berlin.

Wimpy separated from military service as a corporal. A few days after he had left the service, he received a notice that he would have been eligible for Officers’ Candidate School had he reenlisted.He chose other government service instead: with the Internal Revenue Service, the United States Postal Service, and what was then the Defense Construction Supply Center.

His total of 35 years in government service included twenty years as a mail carrier on the Hilltop. Wimpy’s post-military years also included decades of service to the West Side, including time with the Hilltop Civic Council where his fifteen years in action earned him President Emeritus status. The now defunct council held dances for youths in the neighborhood and helped ease racial tensions when African-American students made their voices heard and their presence felt during the Black Power Movement of the 1970’s. The council also responded to the plea from authorities at West High School to help curb vandalism after football games.

In 1992, Wimpy helped organize the Hilltop Reunion Committee and worked with the group’s first community gathering in 1993 at Rhodes Park. Since then, the committee has donated more than forty scholarships to graduating students from high schools on the West Side.

Some of Wimpy’s recollections of Jesse Owens are cited in Heroes Without A Country: Betrayal Of Joe Lewis And Jesse Owens by Donald McRae.

Wimpy was on the board of the Hilltop Historical Society and brought to their attention that Jesse Owens had been a Hilltop resident. In 1995, a plaque was put up in front of the old Owens’ house at 292 South Oakley Avenue in Jesse’s honor.

Wimpy asked Joe Wiles, also a board member of the Hilltop Historical Society, to present flowers to Jesse Owens’ widow, Ruth, when the Olympic Torch passed through the Hilltop. Wiles initially declined, because he did not think he could leave his business as owner of the Hilltop Florists, now Hilltop Floral, Inc. Wimpy volunteered to help Wiles with deliveries so that Wiles could present the bouquet to Mrs. Owens. Wimpy’s gesture helped land him a part-time job with the floral shop for which he still makes deliveries. “I do it because I like to see people smile,” he said.

Wimpy is often called upon to speak about the history of the West Side and usually offers keen insights that enlighten people from different backgrounds.

For the past decade, folks have found Wimpy helping tend the handicapped parking area at the Historic Hilltop Bean Dinner. In August 2012, he was presented with the Friends of the Hilltop’s second annual Karen Whitman Award. This award was named for the late, Karen Rankin Whitman ’62, a long-time Hilltop activist. Wimpy was honored for his similar service to the West Side.

Wimpy has been married for the past 59 years to the former Joan Weaver. They have three children, Deborah Potts, Diane Madison, and Eric Von Potts – all West graduates. In addition, they have nine grandchildren and 25 great-grandchildren, with another one arriving later this year.