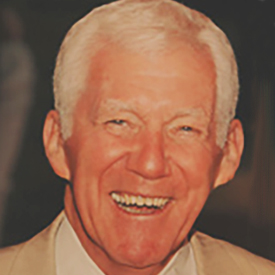 “LIFE IS A SONG AND LOVE IS THE MUSIC”
This is so true for John W. Glass. John was born on New Year’s Eve 1929 in Columbus, Ohio. He attended West Broad Elementary School, West Junior High, and West Senior High School. Some of you might remember that young Drum Major from the 1947-48 days. Or maybe you remember him singing in the choir and playing the trumpet in the band, dance band, and orchestra.

That same year, John joined the Society for the Preservation and Encouragement of Barbershop Quartet Singing in America. A few years ago, this musical group changed its name to The Barbershop Harmony Society.

After completing his military service, John returned to Columbus and joined the sales staff of Republic Steel Corporation. In 1953, John married Dolores Davis, West High School Class of 1947. They have two children. Daughter Janet Skeen lives in New Mexico with her husband and four children. Son James is a Catholic Priest serving in the Richmond, Virginia Diocese.

John’s musical career as a Barbershopper stretches over more than 50 years. His Buzzsaw Quartet won the Johnny Appleseed District Competition in 1955. They then sang in The Miami International Competition.

After moving to Dayton, Ohio, he directed the Dayton Men’s Chorus where his group placed in several contests. He also directed the Kettering Chapter of The Sweet Adelines for several years. His “Perky Laters” ladies quartet, also won regional championships.

John is a member of The Sage Lake Round-Up, the Granddaddy of Barbershop Harmony Honor Chapters. Individuals are invited into this elite group, an independent organization of dedicated Barber-Shoppers. They meet yearly in Michigan.

In Harrisburg, Pennsylvania, John directed The Keystone Capital Chorus for over five years. Another job transfer took him to Richmond, Virginia where he became director of The Virginians Chorus. One of John’s highest honors was singing with the Arlington Sound Works Quartet at a White House picnic. This picnic is held yearly for members of Congress and their guests. President and Mrs. Reagan hosted the party on the White House lawn. Bob Wachter, John’s longtime friend, recruited John to sing baritone with the quartet. Because Bob’s quartet had previously sung at the White House, being selected again for this particular, fun outdoor event honored them even more.

John has sung with more than fifteen registered quartets and was a Chorus Director in the Johnny Appleseed and Mid-Atlantic District for some 30 years.

He was honored as Barber-Shopper of the Year in Columbus, Ohio; Harrisburg, Pennsylvania; and Richmond, Virginia.

If you think his talents stop there, we offer you more… John has been involved in political campaigns as well. He was a BonAire, Richmond Precinct Captain for about eight years. While in Virginia, he worked on the Ollie North Senate campaign and also campaigned for Ronald Reagan, George H. W. Bush, and Virginia Governor George Allen.

John currently lives in Venice, Florida where he continues his musical service to his community by singing with The Lemon Bay Chord Company in nearby Englewood, as well as with the choir and men’s quartet at Christ United Methodist Church in Venice.

Last year, John and the Envoy Quartet sang the National Anthem at Tropicana Field when the Tampa Bay Rays played the Boston Red Sox. In another venue, the quartet sang selections from “The Music Man” for the opening performance of the Sarasota Performing Arts Festival season.

To re-cap the world of this multi-talented man, John has sung with Barbershop quartets, his college Glee Club, has directed various choruses and church choirs, and was instrumental in introducing and educating Columbus, Ohio’s high school youth to the Barbershop Art Form. This was the first National High School Youth Program.

There is no one who loves Barbershop harmony more than John Glass. His life has been devoted to this special hobby and art form. There are only four original American art Forms: Negro Spiritual, Western Ballad, Jazz, and Barbershop Harmony. John is a friend to young and old, performers and listeners, and will sing to you (all four parts – not at one time) at every opportunity.

We are proud of what John has achieved; we are proud he is one of us; and we are proud of this kind and gentle man. He represents the true spirit of the entertainment world. John’s life is truly a song and music is truly his love.