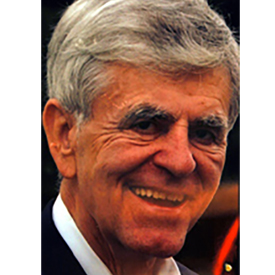 Dana participated in a variety of activities while at West. He played baseball, basketball, and football. He was Co-Captain of the football team his senior year and was selected to the All-City Football Team that same year. As a member of the yearbook staff and Occident (newspaper) staff, he focused on writing sports stories for those publications.

Dana was selected to attend Boys State and, from there he was selected as a representative to Boys Nation. In addition, he was elected as president of his senior class.

After graduating from West, he attended The Ohio State University. He played on the Ohio State football team in 1956 under Woody Hayes. He was awarded a Bachelor’s degree in Political Science from Ohio State and continued his education at Capital Law School in Columbus where he was awarded his Juris Doctor. He was admitted to practice in the state of Ohio in 1966, followed by admission to Federal District Court in 1967 and admission to 6th Federal Circuit Court of Appeals in 1976.

Dana’s general practice took place from 1966-1986. While practicing law, he was elected to the Ohio House of Representatives in the 35th District and was a member of the House from 1980 to 1986. In 1986 he was elected to the Franklin County Common Pleas Court. He attended the National Judicial College in Reno, Nevada from 1988-1990.

Appointed by Governor George Voinovich in 1992, he served a six-year term in the Tenth Appellate District Court of Appeals. He became a member of the Board of Commissioners on Grievances and Discipline. He was re-elected in 1998 and retired from the Court in 2003.

Dana was a member of the Ohio State Bar and the Columbus Bar Association, president of the Franklin County Trial Lawyers Association (1975-1976), and the American Judicature Society where he was appointed by the Court of Common Pleas to the Franklin County Legal Defender Commission (1976-1980). He was also Treasurer of the Ohio Common Pleas Judges’ Association, Ohio Judicial Conference Chairman on the Legislation Committee, and Budget Chairman of the Court of Appeals Judges’ Association.

He received many awards throughout his career including: The American Legion Buckeye Boys State Hall of Fame, the Meritorious Service Award, the Outstanding Legislator Award, the Ohio Public Defender Award, and the President’s Award.

Judge Deshler had numerous decisions published in official case reports and sat by special appointment on the Supreme Court of Ohio on a number of occasions.

In 2003, he received the George Tyack Award for Judicial Excellence presented by the Franklin County Trial Lawyers. Many lawyers believed him to be fair with everyone. Perhaps the highest-profile common pleas case that Judge Deshler presided over was the trial of Robert Biddings, the so-called “handcuff rapist,” in 1989. He sentenced Biddings to life in prison plus 2,715 years for a series of attacks on nearly thirty girls and women.

Sadly, Dana passed away on Sunday, September 16, 2012 at the age of 75. He is survived by his loving wife of 52 years, Carol Deshler, and three sons: Jonathan (Lynne), Judson (Leslie), and Jason (Emily). He also leaves eight grandchildren. Dana was a true friend of the West High Alumni Association, having been a Life Member since 2004. He also attended several of the Christmas Luncheons.