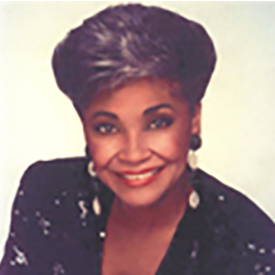 Nancy Wilson blurs the lines between jazz singer and pop singer, preferring to be called a song stylist. A uniquely gifted song stylist able to interpret jazz, soul and pop, Nancy stands among the greatest performers of the past fifty years.

Born in Chillicothe, Ohio, in 1937, Nancy displayed incredible talent as a singer from a young age. At 15 she won a talent show in Columbus – the prize was her own twice-a-week television show, Skyline Melodies. After graduating from West High School in 1954, Nancy was a vocalist with Rusty Bryant’s band and other bands at local clubs. Upon hearing her at one of the local clubs, Cannonball Adderley was so impressed that he told her to look him up if she ever came to New York. That chance meeting led to her being signed to Capital Records. In 1962 a jazz album recorded with Adderley thrust Nancy into the public consciousness.

After countless television guest appearances, NBC gave Nancy her own network series, The Nancy Wilson Show, for which she won an Emmy award for the 1967-68 season. She also performed on The Andy Williams Show, The Carol Burnett Show, The Flip Wilson Show, and had acting roles on TV series such as I Spy, Room 222, Hawaii Five-O, Police Story, The Cosby Show, and lately, Moesha and The Parkers.

Nancy was Capital’s second biggest selling act (behind the Beatles) and a regular on the pop, soul and jazz charts. In 1980 Nancy moved to Columbia Records, and began a second career featuring the new Urban Adult Contemporary format. As the 90s came to a close, Nancy decided to spend more time with family, and she slowed down both her touring and recording. One of her more interesting albums came about in 1991 when pop singer Barry Manilow was given a sheath full of lyrics written by the late Johnny Mercer that the great songwriter never put to music. Manilow added melodies and chose Nancy to sing the resultant songs. She left Columbia and signed with the small non-profit label MCG Jazz for which she recorded a 2001 Christmas album.

After more than 50 years and five-dozen albums, Nancy would create one of the greatest albums of her career on a small custom label. This album, R.S.V.P. (Rare Songs, Very Personal) won the Grammy Award for Best Jazz Vocal Album. In 2004 she celebrated her 50th year in show business with a Jazz Master award bestowed by the National Endowment for the Arts.

Nancy also keeps busy as host of NBC’s Walk a Mile in My Shoes, a look into the 90-year history of the NAACP. Recently, she was inducted into the Walk of Fame for her continuous work in the field of civil rights. She has received many other awards during her career including the coveted Emmy and Grammy. Nancy has always exhibited the highest of standards and unparalleled grace. She has distinguished herself nationally and internationally as one of the great song stylists of the world. And she did it with real class.

Update: We are sorry to report that Ms. Wilson died December 13, 2018 at the age of 81. She had been living in Pioneertown, CA, in an area about 35 miles north of Palm Spring, CA., for a few years. Her publicist reported she had been in ill health for a while. Ms. Wilson is generally considered the Shining Star of West High alums. She will be greatly missed.