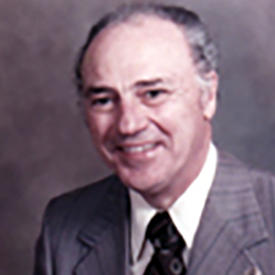 Charles was born in Columbus in May of 1917 and attended West Broad Elementary School and West Junior-Senior High School. Just before his junior year at West and continuing throughout college, he was employed at Herbert’s Grocery on West Broad Street. This job would impact his life in two major ways. It helped provide financing for his education at The Ohio State University where he was graduated in 1938 with a B.S. in Business Administration. Secondly, his duties at the store included home delivery service where he met Anne Hoddy ‘33 who would become his bride in 1940 – a union lasting 63 years.

After college graduation, Charles worked briefly (1938-40) as a district financial director for the Federal Security Agency. From 1940-41 he was the office manager for Goodyear Tire and Rubber in Huntington WV. Goodyear wanted him to move to Akron in 1941 but with a wife, small baby and a strong liking for Columbus west side, he declined the offer and moved back home. After a short two months working at Lazarus, he became chief accountant at Landmark Farm Bureau Co-op. From 1941 Charles progressed at Landmark to the position of Vice-President of Finance. During this time he continued his studies in the accounting field and became a C.P.A. in 1952.

During his tenure at Nationwide, Charles managed the development of Nationwide Plaza from the ground up, including the surrounding neighborhood. The buildings and grounds have received many awards for their design namely the Landscape Awards Program of the American Association of Nurserymen presented to him by former First Lady Nancy Reagan.

On his retirement the employees’ chapel/meditation room was named in his honor. Charles was a member and officer of numerous professional organizations, development committees and other clubs including the Development Committee for Greater Columbus; Downtown Action Committee; Board of Directors Key Bank; American Institute of C.P.A.’s; Masons; and the Columbus Athletic Club. He was a longtime financial supporter and fan of The Ohio State University – both academics and athletics, and a member of the OSU President’s Club. The Columbus Foundation was his favorite charity but he was generous to many others. He was a faithful member of Parkview United Methodist Church and lived all but a few years of his life on the west side. He departed this life in 2003.

Charles’ family includes his wife, Anne; son and daughter-in-law, Gary ‘58 and June (Johnson) ‘58; daughter and son-in-law, Lynn ‘63 and Bob Johnson ‘62 (Linden); three grandchildren and four great-grandchildren who are proud of his accomplishments, his generosity and his strength of spirit.