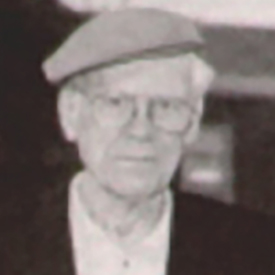 As a student at West High School, Beryl was a member of the football team. He also participated in Hi-Y and the Science Club. Among his many ‘claims-to-fame,’ Beryl is proud to boast that he was the first person in the water when the new Bender s Pool (now known as the Hilltop Swim Club) opened.

His degree in podiatric medicine was earned from the Ohio College of Podiatric Medicine. Beryl and his wife, Martha (now deceased) were married for 52 years. Martha was a member of the WHS Class of ‘36. They have five children, three of whom attended West High School.

Timothy R. Miles, a developer of water parks in Cape Coral, Florida; Jack C, Miles, involved in the field of sales; and Jeffrey E. Miles, a broker-trader of ferrous and non-ferrous metals. Their daughter, Nena Ann Leffel, is now a homemaker.

Always involved in community service, Dr. Miles is a charter member of the Kiwanis Club of the Hilltop with an enviable record of 52 years of perfect attendance. He has served as a mentor for the Boys Scouts and other youth groups along with his coaching in little league and pony league baseball.

His continued service to the Hilltop and West High School is one of distinction and commitment. J. Beryl Miles places a great deal of importance on loyalty and service to his profession, his family, his school, and his community.