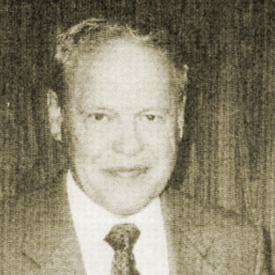 David Kelly Myers was born March 12, 1931. While he was a student at West, he was a member of the Triangle Club, the Stage Crew, and the Hi-Y. He was involved in the Band Variety Show, the production of Showboat, and the Junior and Senior Class Plays, as well as the Cantata, “Let There Be Lights”, the fundraising program to raise funds to light Magly Field (football field). In addition, he worked the Football P.A. System all three years.  David graduated in 1949. David attended The Ohio State University, eventually completing a Master’s Degree in Geophysics in 1956.  He was actually a nuclear physicist / radiation effects engineer. During that time, he married, Nola Jo Sanders on February 21, 1954.

After graduating, David accepted a job at the Carborundum Company (a company that has been a worldwide leader in the development and application of materials such as silicon carbide, boron nitride, aluminum nitride, and other ceramics, with a special emphasis on abrasives and refractory and insulation compounds). His first project was to create a process that would produce a fiber, which could withstand extreme heats. This fiber, and process to create it, was used in the parachutes for the Gemini, Mercury, and Apollo missions, as well as the Space Shuttle.

David then went to work at Bell Labs for Dr. Robert Noyce, the inventor of the transistor. (Dr. Noyce was nicknamed the, “Mayor of Silicon Valley”, who co-founded Fairchild Semiconductor in 1957 and Intel Corporation in 1968. He is also credited, along with Jack Kilby, with the realization of the first integrated circuit or microchip that fueled the personal computer revolution and gave Silicon Valley its name.)

In 1961, David was recruited by Sherman Fairchild to come to Palo Alto, California to work for Fairchild Semiconductors as their radiation effects program manager within the aerospace and defense department. (Sherman Fairchild was an American businessman, investor, and inventor, who was inducted into the National Aviation Hall of Fame in 1979.)  In 1977, David transferred from radiation effects to International Marketing and was in charge of trading technology with Japan and China.  During this time with Fairchild, David worked directly for Dr. Moore (founder of Intel), Dr. Corrigan (founder of Intel and LSI Logic), and Jerry Sanders (founder of Advanced Micro Devices, Inc.).  David left Fairchild in 1982 and started his own successful consulting business.

Many of the projects David worked on, have impacted the world. At the time of his death in 2015, he had published over 300 non-classified whitepapers. A white paper is a document that describes a given problem and proposes a specific solution to the problem, commonly used in government and corporate settings. He had also written more than 200 classified papers. The United States has three levels of classification: Confidential, Secret, and Top Secret. Each level of classification indicates an increasing degree of sensitivity.  In addition, David had subordinately held 100 patents. (A patent is a set of exclusive rights granted by a sovereign state to an inventor or assignee for a limited period of time in exchange for detailed public disclosure of an invention.  An invention is a solution to a specific technological problem and is a product or a process.) Patents are a form of intellectual property.

Some of David’s projects that he was most proud of was: the military use of GPS, the targeting systems for both the Poseidon and Trident missiles, designing the CPU for the Mars Rover, radiation effects on the Mars Camera, and the radiation hardening of the jet propulsion packs used for space walks.

David’s wife, Nola, preceded him at death on August 15, 2013. David died on March 20, 2015 at the age of 84. They are both buried in Elk Grove, California at the Hilltop Cemetery.  Two daughters survive them.