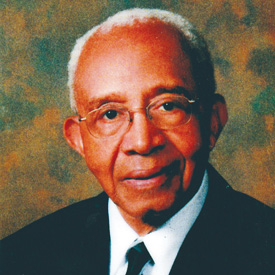 His first job (as an adult) was at the B & T Metal Company, 425 West Town Street in Columbus, where he worked in the cafeteria and the extrusion shop.  In 1949, at the urging of his Aunt Elizabeth Shaw, he enrolled at Franklin University, where Clenzo earned an Associate Degree in Business Administration.  He then applied for admission to the Franklin University Law School, was accepted and graduated in June 1953 with a Bachelor’s Degree in Law. That same month, he sat for the Ohio State Bar Examination, passed, and was admitted to the practice of law August 17, 1953.  He then received his Juris Doctorate Degree from Capital University Law School in 1966.

In 1954, Mr. Fox began working for the Ohio Bureau of Worker’s Compensation as an attorney examiner and in 1955 he became a Referee (Hearing Officer) for the Ohio Industrial Commission.

In 1973, he joined the General Counsel’s Office at Nationwide Mutual Insurance Company, serving as an Assistant General Counsel until his retirement on December 31, 1993. On November 1, 2001, Nationwide Insurance Company Corporate Connection presented Clenzo with the Donna James Award of Excellence. Several other recognitions awarded to Mr. Fox include: being elected to membership in the Franklin County Trial Lawyers Association (April 1, 1968); the (Fourth) Annual Award of Excellence, presented by the Capital University Law School Black Alumni (March 12, 1993); a 2007 statute inscribed with “Lifetime Hilltopper and Historian” from the Hilltop Civic Council; the Columbus Bar Association Award for “60 Years of Practicing Law With Integrity” (2013); Special Recognition from the Ohio House of Representatives 120th General Assembly, sponsored by Otto Beatty, Jr., for being an Assistant General Counsel; and a Commemoration Award, recognizing the life and contributions of Clenzo B. Fox, as a Columbus City Schools alumnus, from the Columbus Board of Education (February 17, 2015).

Clenzo is a member of the Hilltop United Methodist Church, where he has served as Church Historian and Chairman of the Stewardship Committee. From this church, he received a “commendation” in 1989 and in 2010, a “Special Recognition Award, Clenzo B. Fox, Esquire”. He has been a member of the Board of Lay Activities of the Columbus South District United Methodist Church and a past Chairman of the Ohio Council of Churches’ Board of Trustees.  He has also served on the Board of Trustees of National Church Residence, which is a Presbyterian non-profit corporation that builds affordable housing for the elderly.  In addition, Clenzo is a recipient of the Denman Evangelism Award of the Columbus South District United Methodist Church, for his outstanding service in the Evangelism ministry. He has also been involved with the Kairos Ministry (prison ministry) at the Ross Correctional Institute at Chillicothe, Ohio.

His community involvement extends beyond his church work, as he is widely recognized for his involvement in civic and community activities. He has been a member of the J. Ashburn, Jr. Youth Center Board and has served on the Columbus Foundation’s Legal Advisory Committee.  He is past president of the Robert B. Elliott Law Club, a former Assistant Attorney General for the State of Ohio, and a Special Counsel for the City of Columbus.

Clenzo indicated that his friends call him, “The Ubiquitous Mr. Fox”.