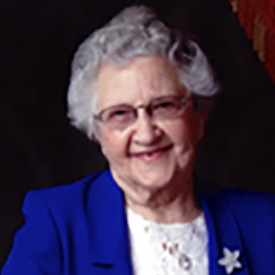 Helen Myers King was born in Galloway, Ohio on March 11, 1911. She graduated from West in 1929. While at West she was on the Senior Executive Committee, the Annual Staff, and the Occident Staff. She also participated in the class play, Junior Outlook, and Office Training.

Helen is a member of the Hilliard United Methodist Church, the Hilliard Senior Center, the Franklin County Farm Bureau, and the Northwest Franklin County Historical Society where she is a charter member. She has spent countless hours of volunteer service at each of these organizations. In addition, she has volunteered her services at the American Heart Association, the America Cancer Society, and the March of Dines. She has also been a poll worker at the Hilliard United Methodist Church and has been a volunteer reader at numerous Hilliard schools, where the children had all dearly loved her.

Helen was married to Robert King for 68 years. They raised two sons in a farmhouse on Frazell Road (Hilliard, OH) in which the King family has owned since 1853. She was a farm wife on a dairy farm raising chickens, hogs, and cattle. She still gardens, cans, and bakes cookies.

In 2010, the Franklin County Farm Bureau named Helen ‘Women of the Year.” On October 7, 2011, she was inducted in to the Hilliard Senior Citizen Hall of Fame. Helen also received proclamations from the Senate and House of Representatives of Ohio and received a United States flag that had flown above the Capitol Building.

Helen is an amazing individual and she is only 102 years old!

(Update: Unfortunately, Helen became ill, one of the few times in her life, not long before our Hall of Fame program that was held Sept. 8. She died a week later on Sept. 13. We were able to present her with her Hall of Fame plaque before she died.)