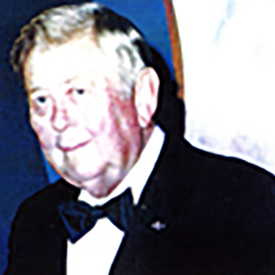 Joe was in the Chemistry Club, Hi-Y, Latin Club, and he was a Room Secretary and Hall Monitor while attending West High. He enlisted in the Air Force after graduating, receiving his wings without any trouble. One of his assignments was to fly an observation plane in the first atomic bomb explosion.

He had 270 missions in Korea and Vietnam where he was known as “Whistling Joe.” He attached pipes to the wings of his P-51 and as he flew in to attack, the enemy would come out of their bunkers to see what was making the noise, making themselves easy targets. Years later he was credited with being the only pilot in a prop driven plane to down a MIG Jet Fighter.

For many years Joe was one of the top test pilots and set the Official World Absolute All-time Speed Record for a single engine plane at 1,525 mph. This was done over the Mojave Desert at an altitude of 40,000.

Joe was also at one time Commander of the Alkan Fighter Group in Alaska with a direct phone line to the Pentagon. His medals include the Silver Star, Legion of Merit, and Distinguished Flying Cross with Multiple Oak Leaf Clusters. After retiring to his ranch in Healdsberg, California he was recalled to active duty by the Northrop Aviation Corporation as manager over their Far East section with an office in Hong Kong.

Joe still makes his home in Healdsberg. He was unable to attend the Hall of Fame Induction ceremony due to recovering from a broken hip. His wife, Charis Tate Rogers, died in 2002. He has a son, Joseph, who also resides in Healdsburg; a son Garrett, of Oakland; and a daughter, Georgia Carver, of Rancho Cordova.

Col. Joseph Rogers, an aviation legend who flew aircraft in three wars and still holds the world record for piloting the fastest single-engine jet, died Saturday at his Healdsburg ranch after a long illness. He was 81. A humble man of quiet grace and dignity, Rogers had a long and colorful career that chronicled aviation history during the last half of the 20th century.

“Colonel Joe Rogers was one of our heroes that grew up in the early days of our Air Force with the likes of Chuck Yeager and other aviation pioneers. The Air Force and the nation owe him and his generation a great debt of gratitude,” Gen. John Jumper, chief of staff of the Air Force, said Monday from his office at the Pentagon.

Rogers, a Midwest farm boy who joined the Army Air Corps when he was 17, was a flight instructor during World War II and a fighter pilot during both the Korean and Vietnam wars, completing 270 missions. In 1959, he pushed an F-106 to 1,526 mph, a record that still stands for single-engine jet planes.

Rogers’ flying achievements earned him many honors, including a place along the mile-long Aerospace Walk of Honor near Edwards Air Force Base in Palmdale. In 1963, Rogers was named the Air Force’s “Top Gun” after winning the force’s air-to-air weapons meet. He was a fellow, the highest rank, in the Society of Experimental Test Pilots.

“Colonel Rogers had all the right stuff but he didn’t stand up and beat his chest about his accomplishments. He did it all for the love of flying. When he died he had logged 13,000 hours of flying time,” said Jim Cook, past president of the Pacific Coast Air Museum at the Charles M. Schulz-Sonoma County Airport.

Cook worked closely with Rogers, who was active in the Pacific Coast Air Museum, and other aviation buffs to bring the F-106 Delta Dart to the museum. It was the plane that Rogers flew to the speed record. Cook said there are plans to honor Rogers during the museum’s annual air show Aug. 20 and 21 at the airport. Plans are to have four P-51s fly the missing-man-formation in tribute.

In October, at Rogers’ invitation, Jumper came to Santa Rosa to attend dedication ceremonies for the restored F-106 Delta Dart at the museum. The Delta Dart was dedicated to Jumper’s father, the late Maj. Gen. Jimmy J. Jumper, whose distinguished military career included a stint as chief of the Air Force Advisory Group in Vietnam.

Gen. John Jumper was just a kid when he sat on Rogers’ lap as he taxied a P-51 Mustang around an airfield. Jumper recalled praying “Please don’t take off,” but admitted it hooked him on flying. He also became a fighter pilot and then moved through the ranks to become the Air Force’s top officer.

Rogers’ aviation career started in 1943 when he left the family farm in Ohio and joined the Army Air Corps. “As a boy, my father dreamed of flying but he had never been in a plane until he joined the Army Air Corps,” said son Joseph Rogers Jr. of Healdsburg. Rogers served as a flight instructor for the Air Corps before being assigned to Korea. During the Korean War, Rogers flew P-51 Mustangs and completed 170 combat missions. On Nov. 8, 1950, while Rogers was leading a flight of four P-51s over Korea’s Yalu River, the U.S. planes were attacked by Russian MiGs, forcing Rogers to shoot one of them down. Between the Korean and Vietnam wars, Rogers did flight testing for the Air Force. During a harrowing test flight in 1964, Rogers and his radar operator were forced into a high-speed bail-out after an in-flight explosion. The bailout was 65,000 feet over Death Valley.

In 1973, Rogers returned to the combat zone as vice commander of a fighter wing in Vietnam. During this tour he added 100 more combat missions. In 1975, Rogers retired from the Air Force, ending his 29-year military career. He worked another 14 years as an executive with Northrop Aerospace Co., selling planes in Asia. When he retired completely in 1989 he moved to Healdsburg with his wife, Charis Tate Rogers, who died in 2002. The couple raised water buffalo and an assortment of other animals on their Westside Road ranch. In addition to his son Joe Rogers Jr., Rogers is survived by his other son, Garrett Rogers of Oakland; his daughter, Georgia Carver of Rancho Cordova; two grandchildren; and two great-grandchildren.

A memorial service is being planned. The family suggests memorial contributions to the Pacific Coast Air Museum, 2330 Airport Boulevard, Santa Rosa 95403. Joseph Rogers was described Monday as one of nation’s heroes.